Who knew that violin makers could be so collegial and cooperative?

Sure, they spend long hours alone at the bench, engaged in the solitary and painstaking work of carving a scroll, planing the plates of a fiddle or laying purfling along its curvy perimeter. But when they get together? These people can collaborate! Case in point: Some 50 luthiers worked together to make a copy of the 1704 Betts Stradivari. This spring, their copy, completed in 2011 at Oberlin College, will join the original in the Library of Congress’ historical instrument collection in Washington D.C., thanks to a donation by William and Judy Sloan of Los Angeles. 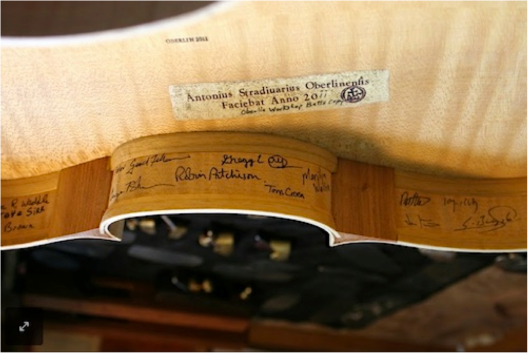 The interior of the 2011 Betts copy, “Stradivarius Oberlinenfis,” is signed along the ribs by some 50 luthiers who made it.

How did a group of violin makers — historically known for guarding their secrets, cheating their rivals and working in isolation — undergo such a change in professional culture?

It has to do with the Violin Society of America’s (VSA) summer workshop at Oberlin College, an annual event that has attracted violin makers, and more recently, bow makers, from some 50 countries around the world since 1986.

“It has come a long way,” said luthier Christopher Germain, who has run the program since 1997. “I ask that for two weeks during the year, everyone tries to have a spirit of sharing, to be nice and friendly to your competitors. Then the other 50 weeks, you can go back to normal!”

“Violinmakers, bowmakers — a lot of us work very independently, and we need to get feedback and continue to grow professionally,” Germain said. “For hundreds of years, makers very jealously guarded these secrets. As a result, the standard of the work didn’t improve. This (kind of openness and sharing) is more of an American view, not so Euro-centric. Everybody has specific information and knowledge, and if everybody shares what they know with the rest of the group, that just raises the standard of our craft that much higher. That’s really what Oberlin is all about.”

Every summer for two weeks, the luthiers work on a special project or theme, which serves as the focus that unites the group on a daily basis. For the last few years, the project has been to replicate the Betts Strad.

The Betts’ little two-week vacation to Oberlin, Ohio in 2011 was actually a very big deal: the violin came with armed guards, a special vault and security — “and everybody wore white gloves,” Germain said. “We made sure everything was as carefully kept and done as possible. We locked it up at night, and took accurate measurements.”

Radiologist Steve Sirr joined the group, to study the Strad. “He’s been doing CT scans of stringed instruments for about 20 years now, and that’s an art in itself,” Germain said. “You can’t just take a violin, do a CT scan and expect good results. You have to know how to set the controls and to get it calibrated correctly so that you can actually get an accurate picture.”

The CT scans gave the violin makers a whole new window into Stradivari’s work. “Through the CT scan, we’re able to see stuff that nobody had ever known before,” Germain said. “You can get the density of the wood: the top plate, the back plate. For instance, we learned that the top of the Betts Stradivari was a very dense piece of wood, which you would never expect, as a violin maker. We generally look for lightweight but strong tops, not heavy ones. So we learned from that.”

They also learned that even Stradivari’s work was not completely perfect. “You expected Stradivari was a meticulous craftsman and never made any mistakes, but even Stradivari (made mistakes) — the purfling didn’t always go down to the bottom of the channel, and there were air gaps and glue — you could never see any of this stuff without the aid of technology,” Germain said.

Their mission was to use traditional crafts, aided by the most modern technology, and make two instruments: one copy that made major use of modern technology; and another copy using all traditional methods. They used the modern method first to create the now-complete instrument that is being donated to the Library of Congress.

“That was made by a process where we took the CT scan information, digitized it, and had the parts reproduced on a CNC machine,” Germain said. “That got us to a very close dimension, and then we finished all that work by hand.”

“CNC stands for Computer Numerical Control, and they’re very commonly used in industry now. You’ve probably heard the term 3D printing. It’s similar to that, where you can take a scan of an object and, based upon that scan, you can digitize it then have the machine reproduce the shape, quite accurately. So we started with that for the first project and finished that two years ago in the white. Then last summer two members of the group, Jeff Phillips with Antoine Nédélec, did the varnish work and we set it up.”

William and Judy Sloan bought the instrument to donate to the Library of Congress, and the proceeds will go to the Oberlin program, to be used for future projects.